Crowdsourcing the future we want

It’s been a while since I watched a TED talk, but this video really caught my attention last week. After the apparent failures of the recent G20 in Mexico and Rio+20 in Brazil, I’ve been attentively following news and opinions related to the future of the Millennium Development Goals and looking for innovative solutions to solving the world’s greatest issues post 2015 when the MDGs ‘expire’.

Jamie Drummond, co-founder of ONE.org really hit the nail on the head for me with his recent TED talk – harnessing the latest technologies and networks of the world to promote a crowd sourced future of the world we want. His answer lies in giving voices to the most marginalised by collecting, connecting and committing to a crowd-sourced future in the world’s first truly global poll.

Drawing on examples such as the open source information project achieved in Kenya through Ushahidi (seen most effectively with real-time data about violence in the slums during the 2008 elections), Drummond believes it is possible to utilise such technologies to reach remote people groups and include them in the goals and vision for the future. 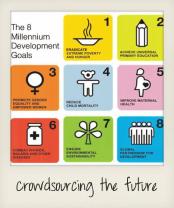 The talk also raises questions about our lack of ability to communicate true success that has come from the MDGs over the past twelve years, and it’s up to the us, communicators, marketers and influencers to really share and promote this success and encourage our governments to continue their commitment to creating a more sustainable and equal future.  This particularly struck a chord with me, as someone that has been interested in articulating the advances of social justice over the past few years (check out Globally Thinking) and has caused me to ask myself, how could I be communicating these successes better? What is the most effective way to share in the positives of aid and development with my networks? What makes people sit up and listen?

Do you think it’s enough for us to collect, connect or commit, or is there a missing element? How are you communicating the successes of the past twelve years? I’d love to see or hear about your examples!