Hello readers from around the world!

Thanks again for joining with us on our journey across Nepal. We appreciate your prayers and thoughts as we travel across this diverse and stimulating country. We hope your senses are being just as stimulated as ours by reading this blog.

You may have noticed, I’ve decided to title each post with a quote from our experiences, and I think this title: “Maybe 5 or 10 minutes, maybe a little more, a little less” perfectly describes Nepali life: flexible, easy going and relaxed – even at the airport!

As I sit at a cafe by the lake, shadowed by the Himalayas, with Nepali music tinkling in the background, I’m saddened by the fact that we’re leaving this beautiful little oasis of Pokhara tomorrow. Yet, it brings me great joy to relive our experiences of here as I share them with you.

Our journey really began in Kathmandu at the airport. Up bright and early on Tuesday morning we reached the domestic airport ready for our flight to Pokhara, to be met by hundreds of eager trekkers, waiting for their own flights around Nepal, stopped in their tracks by unseasonable clouds and bad weather.

As we made our way through the crowds, we spent the next 3 hours waiting in the stuffy and buzzing domestic flight hall as we heard a series of mixed messages “Kathmandu airport closed… Pokhara open… Kathmandu open…Pokhara closed”. It continued this way for most of the morning, but in typical group fashion, we made the most of our time together, sitting on the airport floor to learn Bridge from card master Charlie. After we eventually got bored of cards, I pulled out my iPad to watch some television shows, only to be interrupted by some inquisitive children, bored by their long waits too. I flicked off my shows and opened the game ‘Fruit Ninja’, a simple game of slicing pieces of fruit as they fly onto the screen. After one quick demonstration from me, my eager 6 year old onlooker began to play, and continued to play for 45 minutes, even breaking my high score! As Nepalis looked on and crowds gathered around us to take photos and video, I felt blessed to share this simple moment with this small Nepali boy.

When our flight was finally called, we rushed to the plane, eager to win a coveted seat on the right side, overlooking the Himalayas. As we positioned our cameras and waited in anticipation for the view, our flight attendant came around – “sorry, air traffic. Maybe 5 or 10 minutes, maybe a little more, a little less.” No worries! We’re running on Nepali time here, so don’t expect us to be in any rush when we get back to our homes in the UK or Australia!

Arriving in Pokhara was simply breathtaking, in fact, that’s probably quite an understatement. Blue skies, snowy mountains, calm lake and the friendly sounds of local Nepali music, it felt like we had arrived in a little paradise – yet unfortunately this paradise is no secret to us! Driving along the busy main street of the ‘Lakeside’ district, we found shops brimming with tourists and adventure companies offering activities from paragliding to canoeing. Strangely, like many smaller towns and countries I’ve visited, Pokhara doesn’t seem ruined by the overexcited and often demanding tourists – rather it thrives off them, with friendly shopkeepers ready to give you a bargain, beautiful mountains ready to be explored and one of the many eateries ready to be devoured.

Our first afternoon was spent taking in this small slice of paradise, driving a bargain for pashminas, satchels and woolie beanies. This is a shopper’s paradise for handicrafts and I’m pretty sure I can say our team bought out most the town, with gifts for family and friends, and even a few souvenirs for ourselves. Dinner was by the lake, under beautifully lit up trees, coloured again with Buddhist prayer flags. After working our way through a variety of cuisines – Nepali, Indian and Chinese, we were treated to a cultural performance of song and dance, as we learnt to appreciate the best of Nepali culture.

Wednesday was spent with INF – from a morning orientation with the staff who tireless work to serve God and the people of Nepal, to an afternoon at Green Pastures – a leprosy hospital and rehabilitation centre that is continuing to make a world of difference in the poorest and most ostracized Nepalis. Our morning orientation was one of inspiring and positive stories, a testimony to the work that INF is involved in throughout this country. The staff again confirmed a Nepali characteristic that they all have learned to embody since being here: flexibility – from leaving everything at home to come here for a job that didn’t exist, to a willingness to travel to the most remote areas of Nepal.

Our Green Pastures visit was a big reminder of the blessings in our life: good health, accessibility to heath care and availability of medicine. We were given a tour of the centre by superintendent, Paul, an Australian who has faithfully been working in Nepal for 14 years. We were greeted by the charismatic patients, delighted by our visit as we walked around and shook their hands and attempted to learn of their health issue through their sign language (really wishing we could speak Nepali!) We were particularly encouraged to shake hands, breaking down the stigma attached to the spread of leprosy – FYI it’s not through touch! The diligent staff, mostly Nepali (!!) spoke of the great needs of Nepali people with leprosy and disability, yet also the positive and miraculous stories that are coming out of INF’s work. We were particularly impressed by the artificial limbs department – with a coordinator working for 35 YEARS, the team are doing ground-breaking things in this industry in Nepal – praise God!

We were also blessed to visit the Partners for Rehabilitation centre, a project providing skills training and employment from people recovering from disease, such as HIV/AIDS which really ostracises sufferers. Our team went to town in the shop – buying the beautifully woven handbags and carefully crafted jewels in support of this project. Again, praise God for the wonderful work He is doing in this area of the world!!

FINALLY (we have done SO much in such a short space of time!) after dinner with some INF staff, we headed to bed early ready for our wake up call at 4am – Mt Sarangkot was calling! I’ve never felt God’s greatness more than this morning, climbing up the mountains he crafted and resting at the peaks he formed to marvel his creation. As we made it to the top of Sarangkot by 6am ready for the sunrise, we were reminded of the reason we had all come to this beautiful country – HIM!
As the sun kissed the tips of the Annapurna ranges we snapped away with the rest of the world that were on top of the mountain – different accents surrounded us as we all celebrated the magnificence of the Himalayas. (The picture below does not do it justice!!)

Enjoy the pictures below, they are simply a small reflection of the wonderful time we are having here. My next post (right now!) will be a short one to introduce the team. And then we say bye to Pokhara and Namaste to Nepalganj – a place of not weather, Islamic religion and Indian influences, nestling right in the border – we’re looking forward to experiencing these differences and sharing them with you! 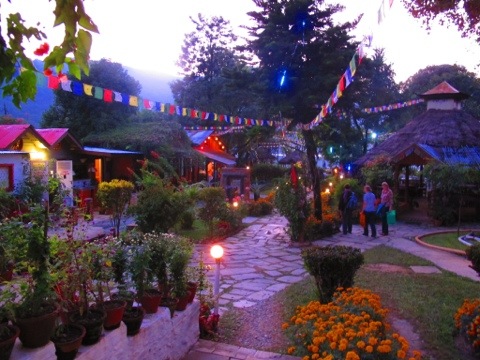